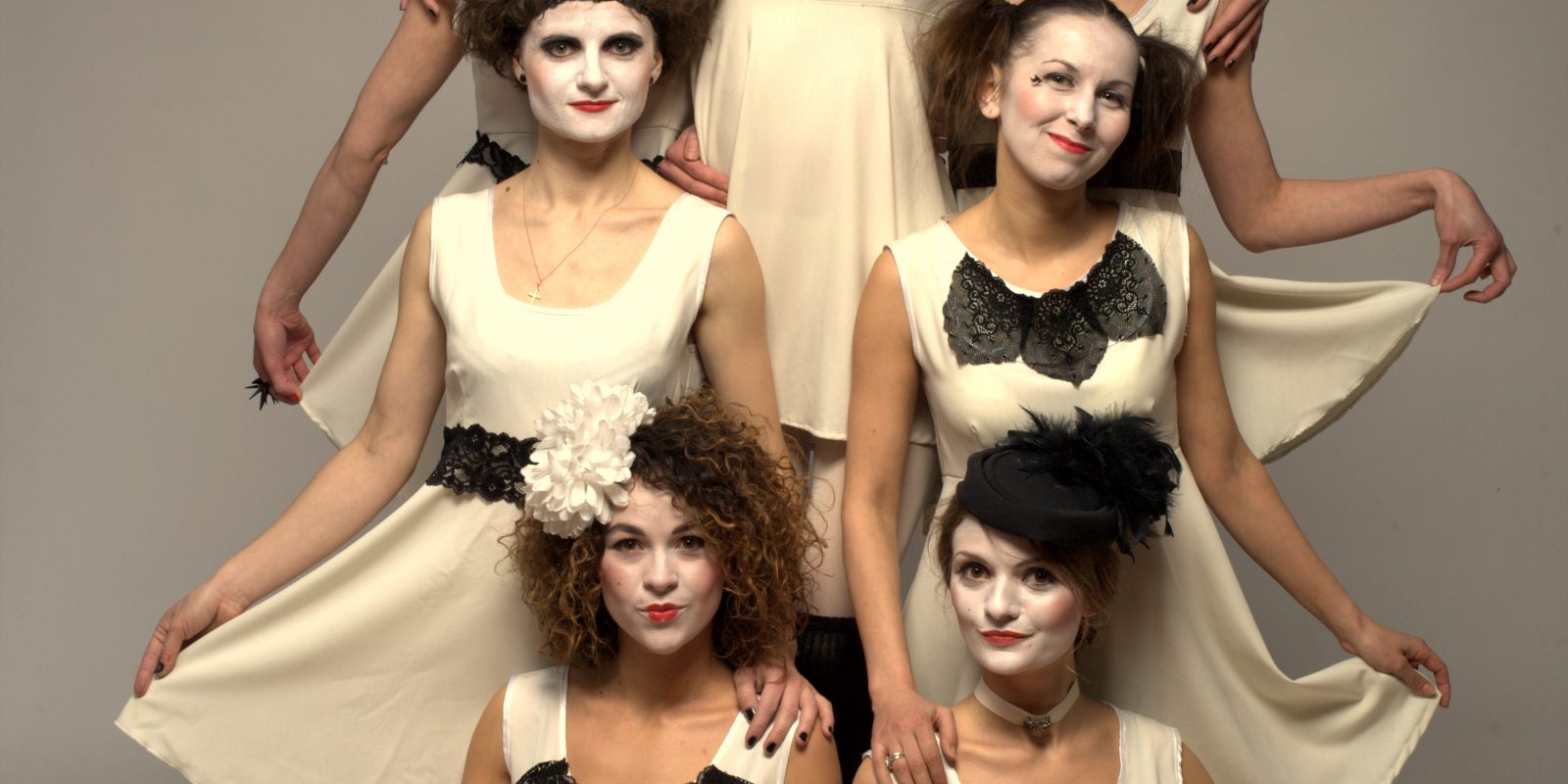 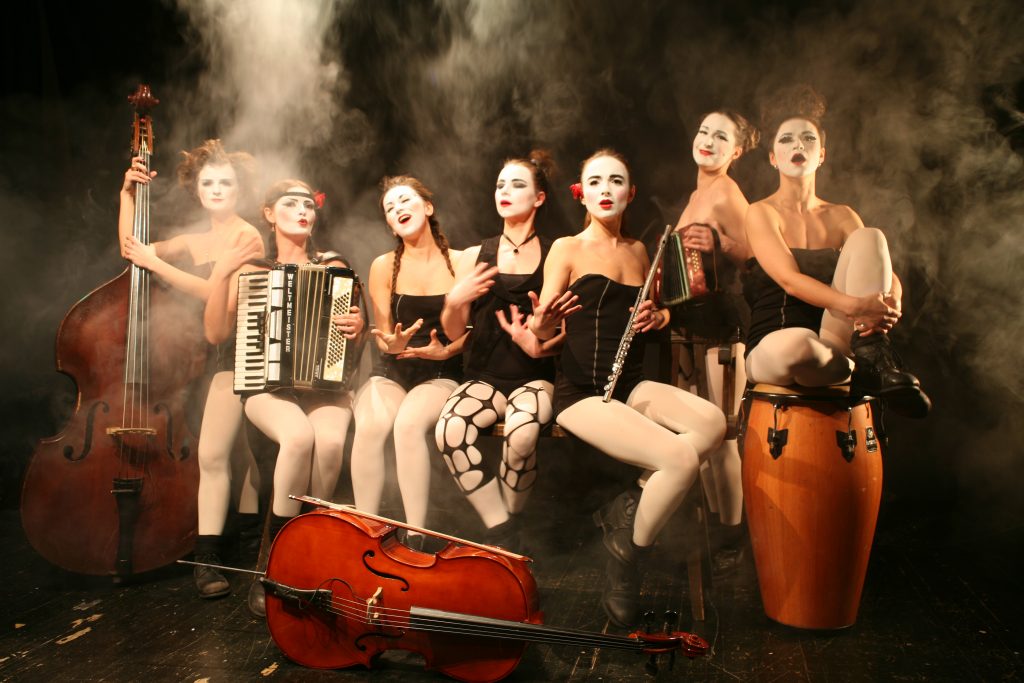 Seven actresses take musical instruments into their hands in order to create a life-affirming performance about love, freedom and beauty which at the end of the day – will save the world. Dakh Daughters create an atmosphere of a French saloon, where Mireille Mathieu befriends Marilyn Manson. On occasion, armed with full set of strings, keyboards and percussion, the women shake the audience with a roar in the manner of Laibach, but can swiftly exchange anger for kindness, turning into fun-loving Hollywood beauties of the 1950’s that dream of tropical vacations in the Caribbean.

Seven actresses with musical instruments in their hands create a life-affirming performance about love, freedom, and beauty which – at the end of the day – will save the world. Already well known in Kyiv as actresses of the DAKH Theatre, band members can occupy neutral ground between the musical genre and dramatic art, in the right experimentally-creative space. Dakh Daughters create an atmosphere of a French saloon, where Mireille Mathieu befriends Marilyn Manson. On occasion, armed with a full compliment of strings, keyboards and percussions, the women shake the audience with a roar in the manner of Laibach (Slovenian avant-garde group), but can swiftly change anger for kindness, turning into fun-loving Hollywood beauties of the 1950’s that dream of tropical vacations in the Caribbean.This completely unique group is ideologically related to the English band – The Tiger Lillies – which has the capability of hyperbolizing characters and involving the public in funny intellectual shows. Song lyrics of these semi-fairytale fairies are based on classical Ukrainian poetry, Nobel-prize winners, their own works, and fragments of popular hits of the past. Drawing on their experiences, the Dakh Daughters easily manipulate the emotions in the audience, changing the rhythm from slow to fast to pausing in just the right places at the right time. Together with their audience, they create rock-operas, demonstrating the desire not only to find new forms of popular music but also to develop the context needed for today’s world. Being one with the rhythm of time, enjoying the creative moment, and accumulating their own energy, the Dakh Daughters develop a space of enormous love around them, breaking the walls of boring routines…

“seven women who bring equal parts musical and theatrical chops to performances that are witty, subversive and brash.” ~ NY Times

“Prepare to witness the sexiest accordion-fueled murder ballad ever performed.” ~ The Weirdest Band In The World (blog)

“[Since] their performance on Kyiv’s Maidan in December 2013… their civic and political engagement has made them one of the leading symbols of the fight for democracy in Ukraine.” ~ International Festival of Contemporary Art-Prague

“They are genuinely original – mixing classical minimalism with passionate Ukrainian folk and a touch of ‘freak cabaret’, delivered with punk energy. As far as lyrics go, they also have an original approach: essentially sampling words from the most inspiring and relevant places they know. One of their “hits” is a version of Shakespeare’s Sonnet 35, reworked as The Rose of Donbass (where armed separatists barred people from voting in the national elections last Sunday).” ~ The Guardian

“Vitaliy Medvedev, one of the Maidan self-defense fighters says he heard Dakh Daughters at Maidan, but couldn’t come closer to see them. ‘Then I saw the video and they are amazing,’ he says. ‘They are like witches in the process of some magical ritual, very cool.’” ~ Kyiv Post 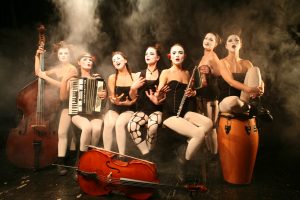 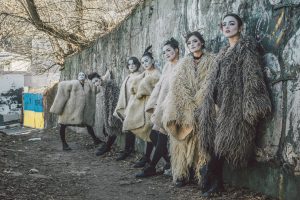 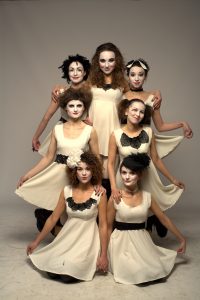 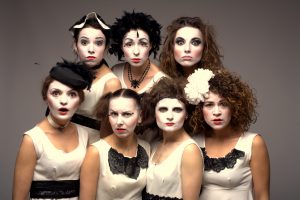 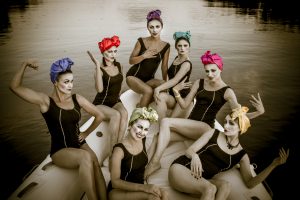