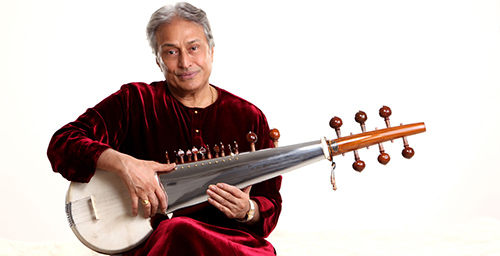 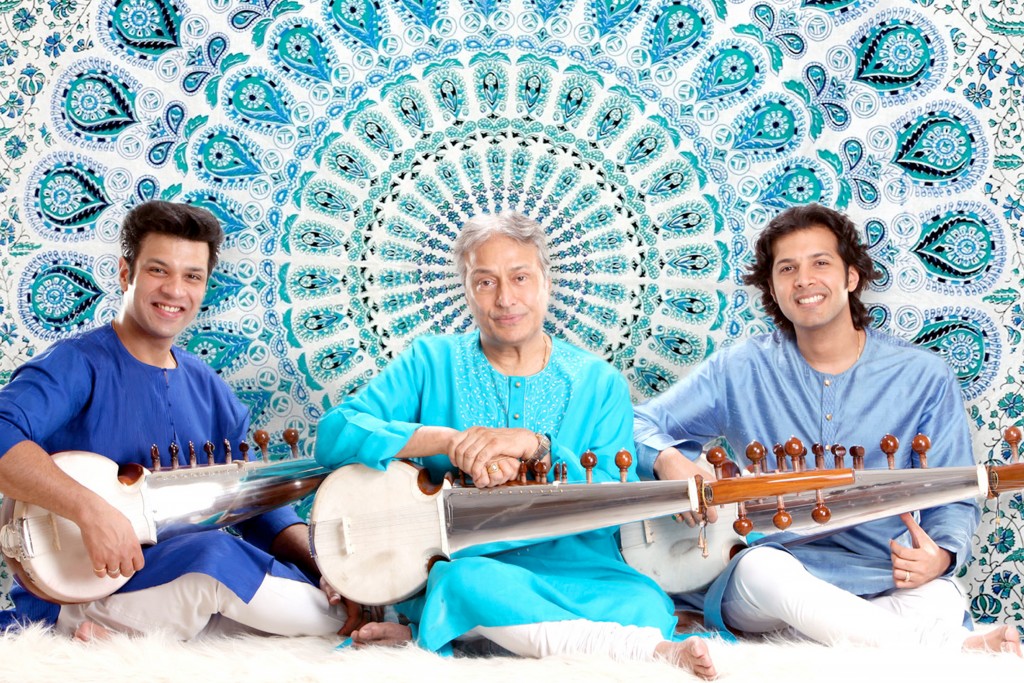 He was all of 6 years old, when Amjad Ali Khan gave his first recital of Sarod. It was the beginning of yet another glorious chapter in the history of Indian classical music.  He is the sixth generation of this legendary musical family.

After this youthful debut, his career skyrocketed, and over the years audiences worldwide have been witness to his new and yet timeless interpretation of the classic music of India. No prisoner to tradition, Amjad Ali Khan also composes his own raag as well as seeking out Western musicians to collaborate with. This has included a full spectrum of genres, from the Hong Kong Philharmonic to guitarist Charlie Byrd.

Amjad Ali Khan performs with his two sons, Ayaan Ali Bangash and Amaan Ali Bangash, all three playing sarods, along with the traditional complement of tabla players. Fine players themselves, the two sons also perform as a duo, bringing the family legacy into yet another generation.

As a soul, so in his heart, Amjad Ali Khan is a man who has proven his indomitable belief in the integration of two of life’s greatest forces, love and music. He is a living example of a man who practices that integration each day of his life, both on stage and off.

He was all of 6 years old when Amjad Ali Khan gave his first recital of Sarod. It was the beginning of yet another glorious chapter in the history of Indian classical music. Taught by his father Haafiz Ali Khan, Amjad Ali Khan was born to the illustrious Bangash lineage rooted in the Senia Bangash School of music. Today he shoulders the sixth generation inheritance of this legendary lineage.

After his debut, the career graph of this musical legend took the speed of light, and on its way the Indian classical music scene was witness to regular and scintillating bursts of Raga supernovas. And thus, the world saw the Sarod being given a new and yet timeless interpretation by Amjad Ali Khan. Khan is one of the few maestros who consider his audience to be the soul of his motivation. As he once said, “There is no essential difference between classical and popular music. Music is music. I want to communicate with the listener who finds Indian classical music remote.”

In the matter of awards, Amjad Ali Khan has the privilege of winning the kind of honours and citations at his relatively young age, which, for many other artistes would have taken a lifetime. He is a recipient of the UNESCO Award, Padma Vibhushan (Highest Indian civilian award), Unicef’s National Ambassadorship, The Crystal Award by the World Economic Forum and Hon’ry Doctorates from the Universities of York in 1997, England, Delhi University in 1998, Rabindra Bharati University in 2007, Kolkata and the Vishva Bharti (Deshikottam) in Shantiniketan in 2001. He has represented India in the first World Arts Summit in Venice in 1991, received Honorary Citizenship to the States of Texas (1997), Massachusetts (1984), Tennessee (1997), the city of Atlanta, Georgia (2002), Albuquerque, NM (2007)and the Key of the City of Tulsa, Oklahoma and Fort Lauderdale, Florida. April 20th, 1984 was cleared as Amjad Ali Khan Day in Boston, Massachusetts. In 1995, Mr. Khan awarded the Gandhi UNESCO Medal in Paris for his composition Bapukauns. In 2003,the maestro received “Commander of the Order of Arts and letters” by the French Government and the Fukuoka Cultural grand prize in Japan in 2004.

His collaborations include a piece composed for the Hong Kong Philharmonic Orchestra conducted by Yoshikazu Fukumora titled Tribute to Hong Kong, duets with gutarist Charley Byrd, Violinist Igor Frolov, Suprano Glenda Simpson, Guitarist Barry Mason, Cellist Claudio Bohorquez and UK Cellist Matthew Barley. He has been a visiting professor at the Universities of Yorkshire, Washington, Stony Brook, North Eastern and New Mexico. BBC Magazine had voted one of his recent CDs titled ‘Bhairav’ among the best 50 classical albums of the world for the year 1995. In 1994, his name was included Biographical in “International Directory of distinguished Leadership”, 5th edition. In 1999, Mr. Khan inaugurated the World Festival of Sacred Music with His Holiness the Dalai Lama. In 1998, Khan composed the signature tune for the 48th International Film Festival.

In his case, the term ‘beauty of the Ragas’ acquires a special meaning as he has to his credit the distinction of having created many new Ragas. It is love for music and his belief in his music that has enabled him to interpret traditional notions of music for a new refreshing way, reiterating the challenge of innovation and yet respecting the timelessness of tradition.

Two books have been written on him. ‘The world of Amjad Ali Khan’ by UBS Publishers in 1995 and ‘Abba-God’s Greatest Gift to us’ by his sons, Amaan and Ayaan published by Roli Books-Lustre Publications in 2002. A documentary on Mr. Khan called ‘Strings for Freedom’ won the Bengal Film Journalist Association Award and was also screened at the Ankara Film Festival in 1996.

In 2007, Mr. Khan featured in the Southbank Centre’s recently launched the Royal Festival Hall hoardings project ‘Rankin’s Front Row’, where his photograph is included in the frieze that will run the length of the river façade of the Royal Festival Hall. This year see the premier of Samagam, a Sarod Concerto with Conductor David Murphy and the Scottish Chamber Orchestra. In 2009, Mr. Khan presented his Sarod concerto Samagam with the Taipei Chinese Orchestra. This year also sees the collaboration with Guitarist Alvaro Pierri. Recently, Amjad Ali Khan was nominated for a Grammy award in the best traditional world music album category. Khan has been nominated for the album ‘Ancient Sounds’, a joint-venture with Iraqi oud soloist Rahim Alhaj.

Married, with two sons, Amaan Ali Bangash and Ayaan Ali Bangash are well known names in the music scene and are the seventh generation of musicians in the family. ‘Coming Masters’ as the New York Times calls them. Amjad Ali Khan’s wife Subhalakshmi Khan has been a great exponent of the Indian classical dance, Bharatnatyam, which, she sacrificed for her family. As a soul, so in his heart, he is a man who has proven his indomitable belief in the integration of two of life’s greatest forces, love and music. He is a living example of a man who practices that integration each day of his life, both on stage and off stage.

“He gave each melodic phrase an individual character with an expert use of dynamics. And in the improvisations, he was creating his own original shapes. He placed important notes between beats; he used trembling-pitch ornamentation, but not too much; his phrases began mildly, became distended, and dove into silence. He played some very fast phrases but projected gently; he didn’t overwhelm you with power.” — NY TIMES

“Using nails rather than fingertips is just one of the complications of Khan’s approach to the notoriously challenging Indo-Persian instrument. Yet his performance conveyed ease and grace, not difficulty. Widely considered to be the greatest sarodist active today, Khan showed immense versatility as well as subtlety.” — WASHINGTON POST

“Amjad Ali Khan may not enjoy quite the status of Ravi Shankar among western audiences, but he is rightly regarded as a major celebrity at home in India, and as the finest living exponent of the sarod – the wonderfully versatile instrument that looks like a cross between guitar and thick-necked banjo, but constructed from wood and goat skin.” — THE GUARDIAN

“Stepping in after his sons Amaan Ali Bangash and Ayaan Ali Bangash had virtually set the stage on fire, exploring the explosive rhythmic possibilities of the sarod without straying from tradition, the Ustad took over in his unmatched style.” — THE HINDU

“It was an extremely special night and it was truly an amazing show. We held an all-night Ragamala with Indian classical performances (Hindustani and Carnatic) from 6pm – 8am in Millennium Park and the Chicago Cultural Center. Amazing turnout. After the MP show, Amjad talked to me for 10-15 minutes and gave me an amazing collection of CDs and an autographed book about his father and their musical lineage. Amaan and Ayaan were amazing as well. Very warm and gracious.

It was simply a night I will never forget. Very memorable! 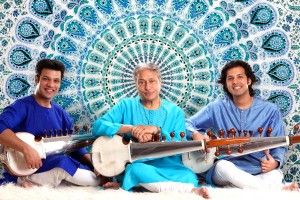 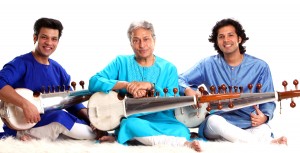 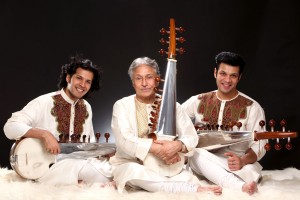 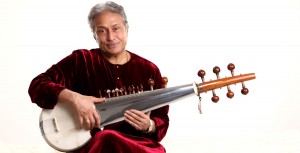