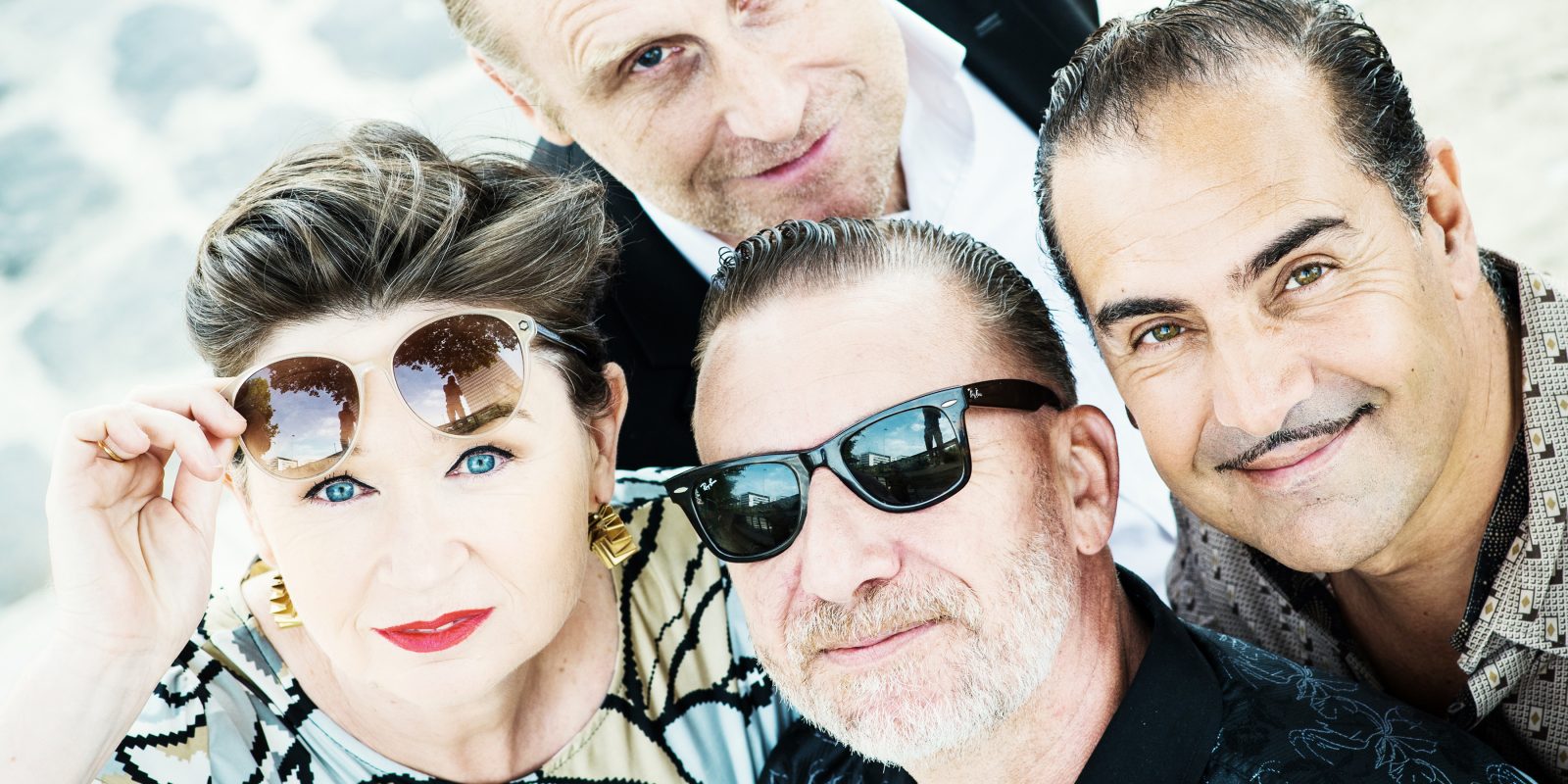 Six albums and two decades spent criss-crossing the globe, playing to enthusiastic audiences from Sydney to San Francisco and Berlin to Beijing, have enabled France’s Paris Combo to create a unique, cosmopolitan sound, establishing the band as one of the most piquant, intriguing groups on the international music scene. Fronted by the charismatic vocals of chanteuse Belle du Berry, the combo have struck a chord with critics and audiences alike with their fun-loving mix of swinging gypsy jazz, cabaret, French pop and Latino and Middle Eastern rhythms.

Six albums and two decades spent criss-crossing the globe, playing to enthusiastic audiences from Sydney to San Francisco and Berlin to Beijing, have enabled Paris Combo to create an international following with their unique, cosmopolitan sound.  Fronted by the charismatic vocals of chanteuse Belle du Berry, the combo have struck a chord with critics and audiences alike with their fun-loving mix of swinging gypsy jazz, cabaret, French pop and Latino and Middle Eastern rhythms.  Venues and festivals where they have performed include  the Hollywood Bowl, Olympia, le Grand Rex, la Cité de la Musique, SF Jazz,  Montréal Jazz Festival, Adelaide Cabaret Festival…

“Tako Tsubo”, their sixth studio album was released worldwide in 2017 and, in 2018 they defied expectations again with « Paris Combo Remixed », composed solely of remixes of their songs.

Paris Combo will release their 7th studio album in  2020 and tour Europe and the US  starting Feb-March, including 4 shows at SF Jazz’s Miner Auditorium in San Francisco and Symphony Space in New York.

The group’s roots are multiple and varied. Lewis played with Manu Dibango’s Soul Makossa band, Belle du Berry started her career with a punk group and guitarist Potzi honed his guitar chops among Roma musicians. Belle  and Potzi and drummer François met in Paris as part of the quirky retro revue, “Les Champêtres de Joie” which went on to collaborate at the closing ceremony of the Albertville Winter Olympic Games in 1992. Du Berry and Australian-born trumpeter-pianist David Lewis met while performing together at the “Cabaret Sauvage”. The musicians began with covers of songs from the 1940s then Lewis joined and he and du Berry began writing original songs, forging the group’s distinct identity. In 1995 the group began to hone their sound playing in cafés and barges along the Seine under the name “Paris Combo”.

The band met during a time in Paris when there was both a revival of swing music and a very conscious mixing of genres. Du Berry cites influences such as Arletty, the French singer-actress of the ’30s, but also the Surrealists and a panoply of more recent artists including the B-52’s. Potzi’s Django-influenced guitar often mixes with François’ ska or Latin grooves to create a fascinating blend. Lewis, who has worked with a wide variety of artists including Manu Dibango, Maurane, Arthur and Carla Bruni, attributes the group’s approach to Paris’ cosmopolitan atmosphere.

Paris Combo’s eponymous 1997 debut disc arrived as the swing revival was in full bloom, yet the band’s wide- ranging mix of musical influences instantly set them apart from other groups in the genre, winning critical praise and appealing to international audiences. The momentum continued with the release of their second album, “Living Room,” which went gold in France in 2000, and confirmed the group’s international standing, with tours of the United States, Australia and Asia and a nomination at the French industry awards, Les Victoires de la Musique. The following year Paris Combo released their third set, “Attraction,” with a series of concerts at the prestigious Cité de la Musique in Paris. Their fourth album, “Motifs,” 2004, was supported by a tour that included Australasia, Brazil and the iconic Hollywood Bowl in Los Angeles where the group was accompanied by the Hollywood Bowl Orchestra.  The troupe reunited in 2010 after a four-year hiatus and spent a year writing, rehearsing and rediscovering their hallmark sound. They began performing the new material that evolved into the album “5” and, in September 2011, delivered a memorable come-back show with orchestra, again at the Hollywood Bowl, kicking off in style an exciting new phase in their career.

If music be the food of love, then Paris Combo is a banquet. – ADELAIDE ADVERTISER

Returning to America after a too long hiatus, the swinging 5 piece Paris Combo mixed infectious and irresistible rhythms and melodies (guaranteed to get you to grab your partner) with lyrics about every facet of love imaginable, and doing it by melding Hot Jazz of the 20s with a Rive Gauche sensibility. — JAZZ WEEKLY

Fun, musically intelligent and entertaining…Paris Combo is the real deal and hopefully they’ll be back in Cleveland sometime soon. – CLEVELANDCLASSICAL.COM

Over the course of five albums, the Paris Combo has fired the imagination of anyone who likes their music cool, continental, witty and more than a little mysterious.   — BOSTON HERALD

Last night’s performance of Paris Combo at City Winery Napa was a cool, refreshing dip into the deep end of some seriously fun Frenchness. — EXAMINER

My favorite French cultural export of the past decade is this French quintet. — SEATTLE TIMES

A French quintet with a seemingly endless supply of catchy hooks and imaginative lyrics. — VARIETY

It felt like you were in a swinging, bohemian Parisian nightclub of the ’20s and ‘30s…. — EXAMINER .COM (Indianapolis) 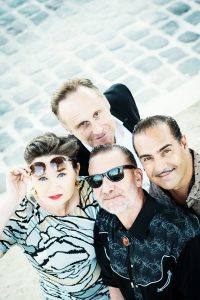 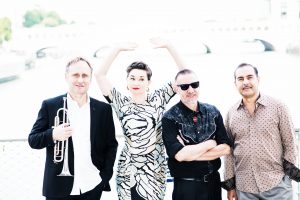 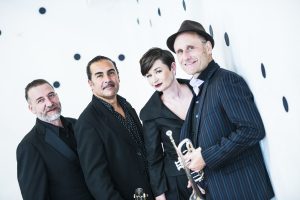 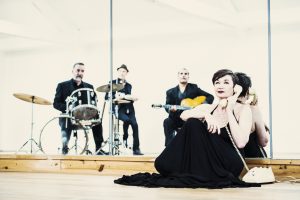 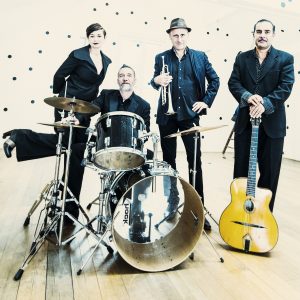 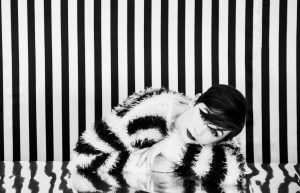 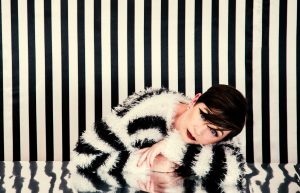 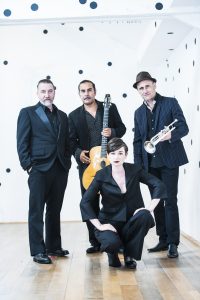