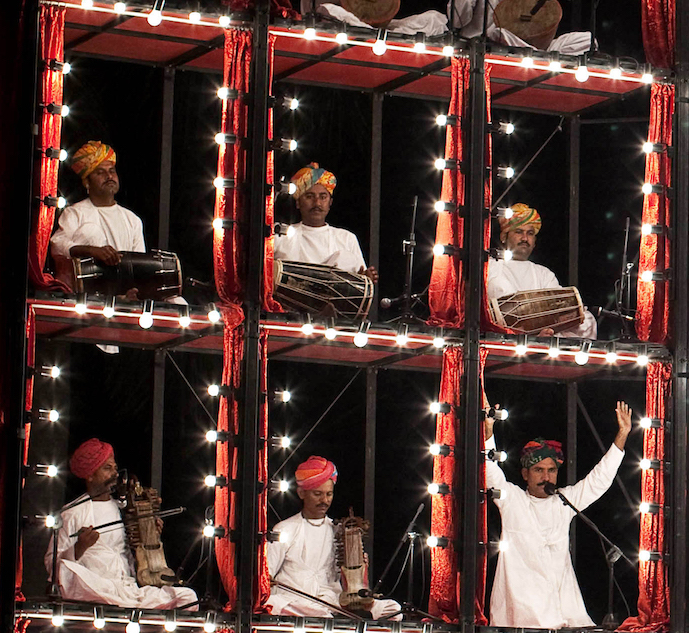 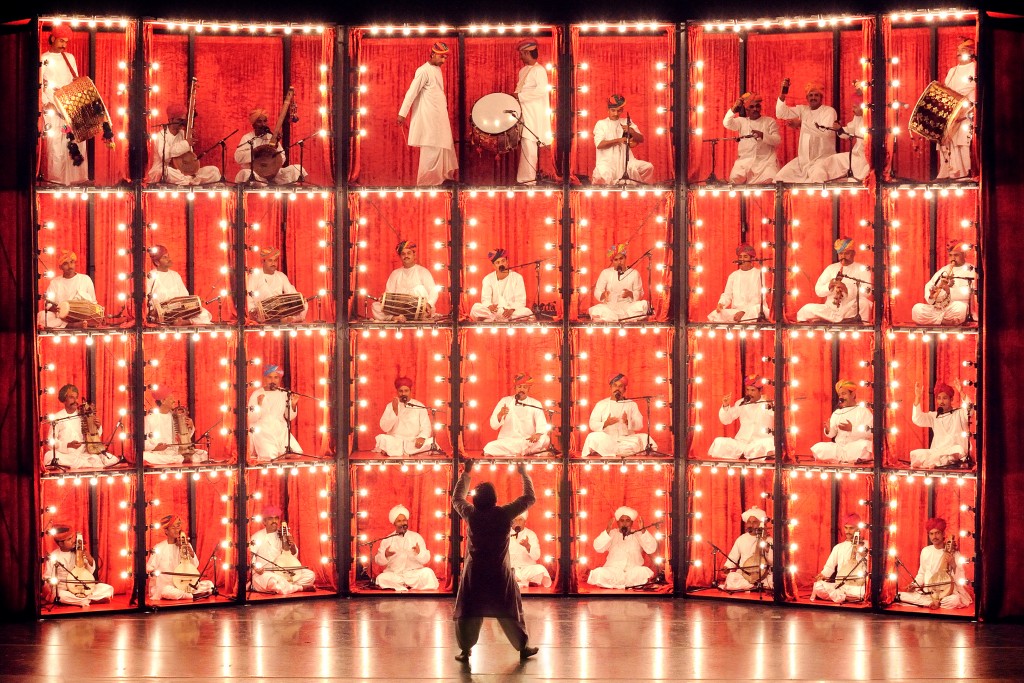 How many times have you seen a band that satisfies the ears but does nothing for the eyes, that’s seemingly unconcerned about creating even the mildest spectacle? Let us reassure you that that will never be the case with The Manganiyar Seduction. The vision of theatrical director Roysten Abel, this mass ensemble of more than 40 Muslim singers and musicians from the Rajasthani deserts serves up an astonishing audio-visual feast. Set up on the stage is a four-storey bank of small pods, each one framed by lightbulbs. More crucially, each pod is occupied by a single performer who is illuminated whenever his voice or playing joins the extended piece of music being performed. As the ensemble grows in number and the sound gathers momentum, the skin-pricking climax is heralded by an uncomplicated but deeply effective light show as all the pods glow and dazzle. An extraordinary concept, brilliantly executed. Miss at your peril.

Areas of Representation: Worldwide (except India)

The Manganiyar Seduction was first created for the Osians to open the film festival in Delhi 2006. The success of the show got the show on the road.. This project allowed Roysten Abel to collaborate with the Manganiyar musicians for the first time. The concept creates a dazzling union between the Manganiyar’s music and the visual seduction of Amsterdam ‘s red light district. The sets are a combination of the Hawa Mahal and the Red light district of Amsterdam. It can also be compared to a magic box. 43 musicians are seated in 36 red-curtained cubicles arranged in four horizontal rows one on top of the other; and the concert begins when a single cubicle lights up and the first singer begins his song. Soon another cubicle lights up and then another thus creating a dramatic and astounding build-up of musical instruments and voice as young men, women, children and the elderly of the Manganiyar community take you into a world which is even beyond yours or their own. The Normal practice is to take and use music for theatre but here Roysten reverses the process and uses theatre to create magic in music.

The Manganiyars are a caste of muslim musicians who traditionally performed for the kings of Rajasthan in India . Over the years their patrons have shifted from the kings to a person who could give them a meal. Their repertoire ranges from ballads about the kings to Sufi songs written by various mystics. They also sing songs for various occasions like birth, marriage, rains, feasts etc. Even though they are classified as folk musicians their traditional music is classical and it clearly indicates the roots of classical music in India . However the rawness of the folk and the complexness of classical music is what makes their music so special. They live in the deserts of Rajasthan and are one Muslim community who also worship Hindu Deities.

Director Roysten Abel was born in Kerala, South India. He did his schooling in Good Shepherd International School, Ooty and it was here that he started writing and directing plays. Little did he know then that he would continue doing this for life? He went to study commerce in college but dropped out twice after enrolling in two different colleges. Bored with commerce and business, which he had to do at his parent’s insistence some strange providence made him ask himself what he had enjoyed most in his life till then and the only thing he could think of were the plays he had done in school. Off he discarded the family business, joined drama school, and informed his parents after he had taken admission.

Roy graduated from the national school of drama in 1994 and then went to apprentice with the Royal Shakespeare Company in the same year. He came back to India in 1995, founded the Indian Shakespeare Company, and as the name suggests his initial work was lot of Straight Shakespeare. A major turning point in Roy’s life was in 1999 when he devised and directed Othello a play in black and white, which was his first original work. It went on to win the Scotsman fringe first award and since then has toured extensively around the world. This work got him national and international recognition and what followed was a spate of original works, which he conceived and directed. Some of these plays were produced in India and some in Europe.

He then started to work, with out of work street performers (Magicians, Jugglers, Impersonators, Snake charmers, Acrobats, Musicians, and Puppeteers etc.) This work got noticed in Italy and he was invited to conceive and direct a play on Fellini in Rimini, which is Fellini’s hometown in Italy . In that same winter he came down to India and created a play called the Spirit of Anne Frank, which starred the biggest female stars in the country. Soon after this he went on to do his first feature film In Othello that was his first step into cinema. He recently started to work with musicians creating theatre in music and his two productions The Manganiyar seduction with 50 Manganiyar musicians and A hundred Charmers with a hundred snake charmers is currently on world tour. Roysten just finished directing his latest production at the Historic red fort in New Delhi with 2000 folk artists. He is creating an International Center for Contemporary Traditional Performances in Jaisalmer, which should be ready by 2015. Roysten is also working on his new production titled ” The Soul Kitchen” which should open in 2013.

NY TIMES
After the White Light Festival closed with a showing of the “The Manganiyar Seduction,” the word “festive”  seemed very appropriate. The Manganiyars are a caste of singers and instrumentalists from Rajasthan state in northern India. The show is a theatrical presentation of their ecstatic music-making, mixing Muslim and Hindu traditions, with the 36 performers stationed in boxes laid out in a vertical grid, nine boxes across, four high.

NPR
The seduction is a slow one in this unusual multimedia experience. After a while, another box lights up and another musician, also in white, this one with a multi-colored turban, begins to sing. The lyrics, says Abel, are “all Sufi couplets, and it’s all crying out to the universe or god.”

THE INDIAN EXPRESS
Soon enough, everything drowned and all we heard was the sound of percussion, reverberating through the arena. The thumping drums resonated through the body and there isn’t an iota of exaggeration in that. What appealed was the idea of blurring boundaries in the brothel-inspired spectacle. It isn’t often that one sees a juxtaposition of sin and spirituality, purity and profanity, all at once. It’s unfair to compare any other act from the festival with “Manganiyar Seduction,” none had the kind of impact this one did. This was star-quality sorcery and we left the venue with our senses stimulated. 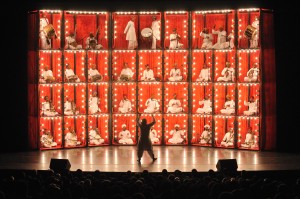 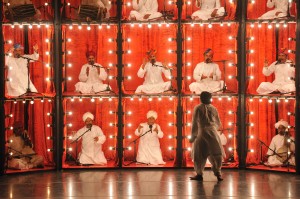 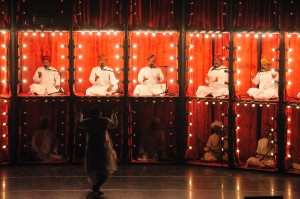