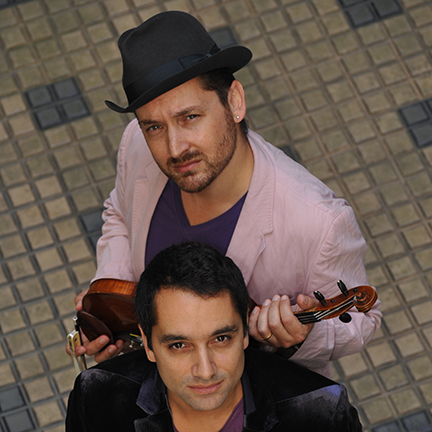 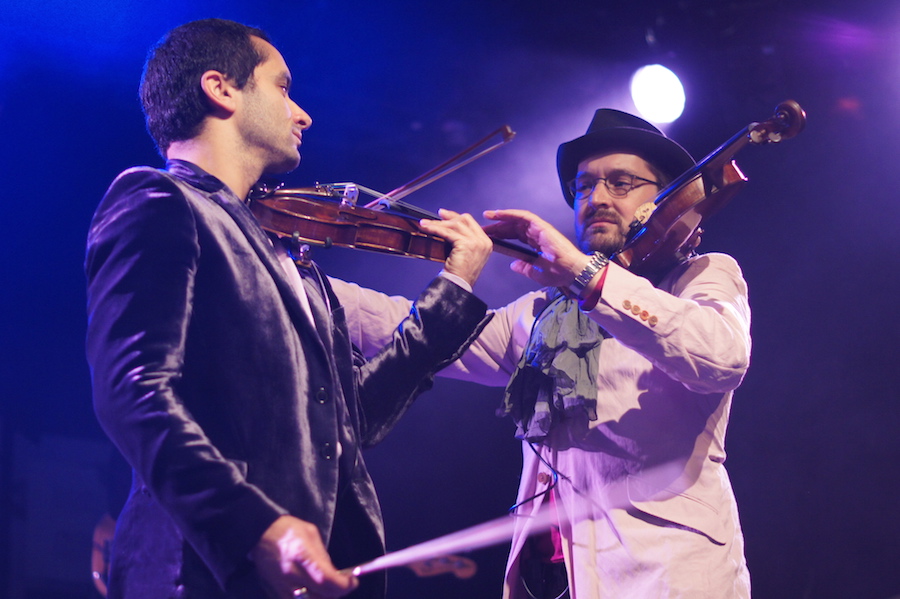 Combining elements of jazz manouche and other Romani music, Yiddish and Klezmer music, this Paris-based sextet offers an irresistible invitation to participate in some of the most rhythmic and emotional sounds emanating from any part of the world. Led by fiddle playing brothers Eric and Olivier Slabiak—who’s family has been soaked in Gypsy and Manouche music for centuries—Les Yeux Noirs is a high-energy celebration of history and life. With each frenetic stroke of their bows, Les Yeux Noirs take the listener further into a dizzying vortex of Central European sounds and images.

Areas of representation: Worldwide (except France)

For over twenty years, Les Yeux Noirs (The Black Eyes) have been carving their own path down the road of Yiddish and Gypsy music. Led by fiddle playing brothers Eric and Olivier Slabiak, Les Yeux Noirs is a high-energy celebration of history and life.

The brothers grew up in the Marais of Paris, their family soaked in Gypsy and Manouche music for centuries. Two uncles, both professional violinists, used to bring their friends around, including Joseph Reinhardt and his pals from the Hot Club de France. Little Eric and Olivier were early virtuosos, the pride of the family. And in 1992 they combined their triple cultures—classical, rock, and Gypsy—and founded Les Yeux Noirs.

In 2000, the band left behind traditional standards, and began incorporating their own compositions into the repertoire. Drums, accordion, electric bass and guitar rounded out the ensemble.

Since 2001, Les Yeux Noirs have performed more than two hundred concerts in their nine U.S. tours. They have widened their original base beyond the comfortable networks of cultural centers and theaters, conquering new venues worldwide: jazz and classical festivals, California biker clubs, churches and smoky cellars. Wherever they go, Les Yeux Noir is guaranteed to have the audience smiling and dancing, captivated by the gypsy spirit.

CHICAGO TRIBUNE
Brilliant as violinists and beguiling as vocalists, the brothers have managed to re-cast age-old Jewish and gypsy musical traditions in contemporary terms. Making no apologies for its amplified fiddles and plugged-in guitars, Les Yeux Noirs (which translates to “Black Eyes”) draws equally on the past and the present. Ancient scales resurface in snappy pop-song formats; time-honored songs from East European shtetls re-emerge in peppy, populist settings… To hear this band reworking traditional dance music and Yiddish lullabies is to behold a remarkably deft aesthetic transformation.

TUSCON WEEKLY
It would have been difficult to imagine a more joyous musical journey.

“Thanks for checking in – everything was fantastic, and the gentlemen of Les Yeux Noirs are great to work with.  They gave a great lec/dem to a room full of college students, leading the most engaged discussion I’ve ever seen those students have with a visiting artist.  The show was wonderful, and the audience appreciative.  I really enjoyed the piece that looped in the recording of Eric and Olivier’s grandmother singing.

It seemed like the band enjoyed their time in Louisville (they even snuck in a trip to an accordion shop).   Thanks for bringing us another great group. ”

“The show was great! The artists were very friendly and a blast to work with. The audience reaction was excellent as well…a lot of hooting and dancing as well as a great response post-show with folks sticking around and chatting with the brothers.

It was a pleasure working with them! ”

“The show was great as in the past. But there was plenty of new material. The sibling rivalry has mellowed a bit, but the introduction on family stories and personal point of view especially by Eric were appreciated by old and new audience members.

We were one of the first locations they played in the US and CSPS (especially the neighborhood) has changed a lot even since their last visit in 2007.

We had a good time, although only half a dozen of us were dancing in the aisles.” 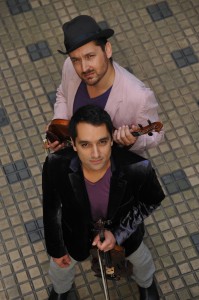 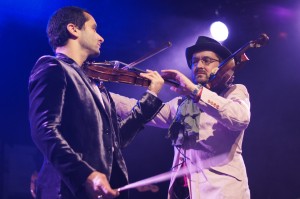 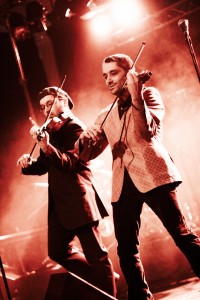 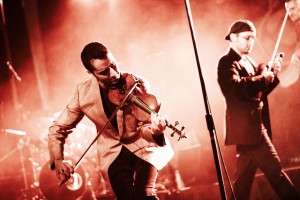